A changing global climate is expected to result in more frequent severe weather events that are likely to impact increasingly urbanised communities and infrastructure. The responsibility for decision makers to make timely decisions to protect communities and reduce losses from severe events such as floods has never been higher. Access to dynamic information on unfolding events ahead of time is critical for decision-makers in order to reduce overall impacts and make communities more resilient to flooding and adapt to a changing climate.

In recent years, South Asia has experienced a number of catastrophic flood events. Floodlist reported that during the summer of 2017, two million people in India were affected as the state of Assam was hit with a third of the flooding. Rivers in Bangladesh also saw record highs with around 1.3 million people suffering its effects.

In 2018, floods were reported by BBC News as being the worst in 100 years, with more than 200,000 people were left living in camps after their homes had been flooded or washed away.

‘At least 324 people have been killed in flooding in the southern Indian state of Kerala in what local officials say is the worst flooding in 100 years’ – BBC News.

With the monsoon season from July to September each year, flood waters, often driven by river flooding, can reach exceptional highs, rapidly resulting in disruption to daily life, costly damage to infrastructure and fatalities.

We have worked with a host of clients across India for the last eight years. In 2018, we undertook a case study demonstration of the Flood Foresight system to assess the utility of providing forecast-based flood maps ahead of major flood events in the region.

Our Brahmaputra basin case study was a demonstration of our global flood inundation and impact forecasting capability. Using our unique flood forecasting system, Flood Foresight, this demonstration coupled the EC Copernicus Global Flood Awareness System (GloFAS) with a library of JBA Global Flood Maps data. The resulting forecast flood inundation maps (provided daily and up to 10-days in advance) can be used to estimate the impact of a current, evolving flood event in terms of area inundated, populations affected, and communities and infrastructure at risk.

The emergence of forecast flood maps enables governments, NGOs, insurance companies and donors to take pre-emptive response decisions – these tools enable forecast-based financing, parametric insurance, claims triage, siting of defences, and public alerting. Ultimately, JBA’s decision support tools are designed to present the best available metrological and hydrological information to those that need it most. This gives decision makers a better understating of river flooding ahead of time, assisting them to hopefully reduce the overall impact of flood events.

Click here or the image below to read the full Brahmaputra basin case study. 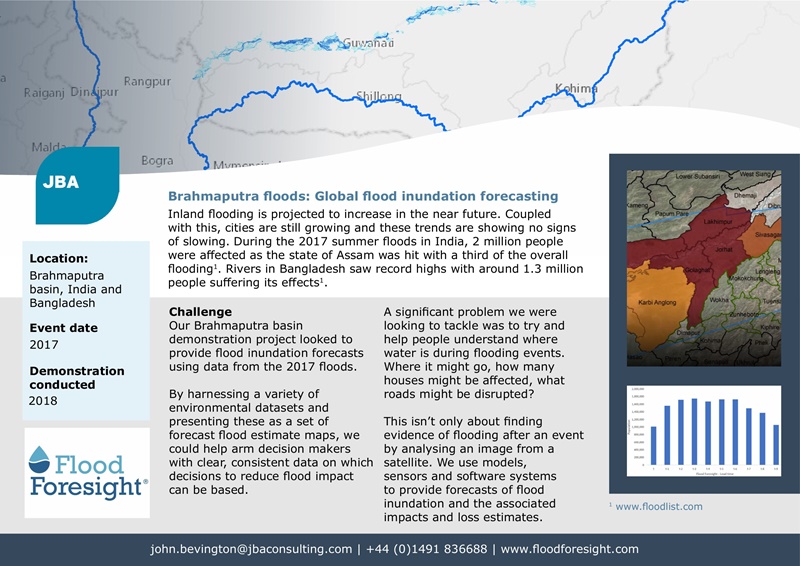 JBA is active in many parts of the world working on projects focused on climate resilience and adaptation, flood forecasting, flood risk modelling and management, and assessment of nature-based solutions to name a few areas.

We have significant expertise in designing and installing flow gauging stations, including modifications of existing gauging stations to facilitate fish passage (e.g. through retrofitting of baffles or adding a Larinier fish pass in compound with an existing gauging weir). We can advise on siting, choice of method/feasibility and design. We have also excellent working relationship with NIVUS GmbH, with whom we have worked closely in designing new transit time ultrasonic stations.

We have an impressive track record in relation to delivering strategic hydrometric studies:

All the data we collect and supply undergoes strict validation and data assurance processes before use/issue. We are also able to undertake independent validation or checks of third party data; a recent example being an independent review of the quality of hydrometric data collected by the Tweed Forum as part of their Eddleston Water Project.

Our team has been widely involved in defining procedures for data management and assessment of data quality, of which some of the higher-profile projects have included:

We offer a spot gauging service using our own Valeport Model 801 Electromagnetic Open Channel Flow Meter, which we operate in accordance with BS EN ISO 748:2007 and which undergoes calibration every three years by the manufacturer. Recognising those situations where specialist equipment is needed we also have expertise with hired instrumentation including OTT’s QLiner, Sontek’s RiverSurveyor and FlowTracker devices and RD’s Stream Pro ADCP.

Our team is highly experienced in the development of new, and in the reviewing of existing Stage-Discharge and Velocity-Index ratings. We use our innovative in-house applications to aid hydrometric data review and analysis. To date we have derived over 100 new stage-discharge ratings on behalf of the Environment Agency. We also run training courses on the topic of extrapolation of high flow ratings and use of modelling to extend high flow rating limbs.

We are expert trainers in hydrology (our team runs the foundation and advanced level training courses offered within the Environment Agency).  We offer a range off-the-shelf courses covering theoretical and practical aspects of hydrological analysis but are equally able to provide tailored training based on real case studies and practical examples.

Visit our training page for more information and to book your place on a course today.

Whilst the primary responsibility for delivering water and wastewater services lies with the water companies, Local Planning Authorities can use the planning system to promote solutions which contribute to improving the management of water and provide other benefits, including: